Parchment or toilet paper: why most mission statements are not worth what they are written on

“Most mission statements are not worth the paper they are written on”. Discuss…

That would be an interesting question on any management course today. But we don’t do theory. We do the practical. Before launching the Perfect Teams application in 2016, our founder had been working with business owners for three decades, helping them to get the best from their teams.

Over the last decade our team has carried out practical research into the formation of perfect teams and, has worked with over 2,000 people from more than 250 organisations across multiple sectors. It is this combined experience that leads us to make that headline statement about mission statements.

All is not lost though. As we have highlighted in many of our previous articles, a vision is an important part of building and motivating your perfect team.

In this article then, we will identify why we believe most mission statements are not worth the paper they are written on. We will highlight how they can be fit for purpose.

WHAT IS A VISION?
When we looked at what organisations could learn about perfect teams from John F. Kennedy, we identified that his statement of “a man on the moon by the end of the decade”, provided a clear, inspirational vision.

EVEN WITH THE VISION, YOU NEED A BALANCED TEAM TO BRING IT TO LIFE:

Thinking back to that article about JFK again, we noted that the perfect team will have a balance of three core elements- three ways of processing information and seeing the world. 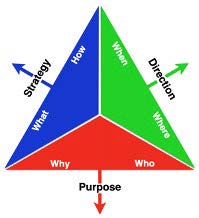 1) The where and when

As a practical example, a few months ago we also shared a video highlighting the difference between two teams, and then showing how a merger between the two would bring balance.

SINEK ONLY HAS HALF OF THE EQUATION:
For us, Simon Sinek’s Golden Circle exemplifies what is wrong with mission statements. It focuses on the ‘why’, ‘what’ and ‘how’ and does not account for the ‘where’, ‘when’ and ‘who’ parts needed for a perfect team.

During one of our recent conversations, it was neatly summarised for us by a client saying, “You can have the best reasons, the best tactics, and the best strategies, but if it is the wrong people, the wrong time, and the wrong direction, you’re screwed…”

Looking at one of the most infamous companies in history as an example. After Enron collapsed, one of our contacts walked into their office and found a plaque with their mission statement on it. He promptly hung the plaque in his toilet, telling us, “It was the only place it should be seen”.

According to their mission statement, their vision was to “become the world’s leading energy company- creating innovative and efficient energy solutions for growing economies and a better environment worldwide”.

Thinking about a vision being a ‘where’ and ‘when’ statement, Enron’s vision only told us what they wanted to be. It was, in fact, more of goal than a vision. In simple terms, it was little more than words.

That was a running theme at the company too, because their values spoke of ‘honesty and integrity at all times’ and the need to ‘set the standard for others’.

Their ‘vision’ only really included the ‘what’, ‘how’ and ‘why’- half of the equation for a perfect team. There was nothing inspirational and emotive about it.

The inspiration comes in the form of the ‘where’, ‘when’ and ‘who’. If you tell someone you have the best thing since sliced bread next door, but do not give them a reason why it is important to them, they will not go and look at it. If, however, you tell them why it is important to them- and give them a galvanising reason to believe in it, they are very likely to go as far as walking over hot coals to look at it.

We do not need to look to scandals like Enron to show how most mission statements only include half the equation though.

Google’s mission statement, which is ‘to organize the world’s information and make it universally accessible and useful’, also shows a lack of real vision and purpose.

PEOPLE NEED A SENSE OF PURPOSE:

In our previous article, we looked at how to motivate team members, and identified that motivation is about attention. With a clear vision then, you are already on the way to focusing that attention and providing that motivation.

Thinking back to President Kennedy and his ‘man on the moon’ mantra, one visit to NASA epitomises the effect of a clear and concise vision.

When he saw a janitor cleaning his mop, he asked him what he was doing. The janitor is said to have replied, “Mr President, I’m putting a man on the moon”.

After onboarding our first international licensee in 2020, the vision for Perfect Teams is to be the profiling instrument of choice for the twenty-first century, with a presence in 12 cities across 12 countries by the end of 2024, which we will do by attracting at least 144 global licensees.

How does your company’s vision and mission statement stack up? What parts of the perfect team equation are you missing?
Nobody is perfect, but your team can be. It starts with you…

To find out how we could help your organisation build that perfect team, please sign up to our next complimentary workshop by clicking here.